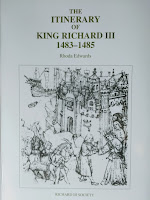 Link to: Itinerary of King Richard III by Rhoda Edwards

Rhoda Edwards (1940-2018) was a historian, archivist, archaeologist and writer whose itinerary of Richard III has been invaluable to historians of the fifteenth-century since she published it in 1983. The Society is therefore very grateful to her executor for permission to share this itinerary online so that it is available to a wider audience.  The copyright remains that of her estate and any use made of this should include reference to the original book. Her executor, Mrs Deborah Isles, can be contacted at Gumersalls Solicitors, The White House, 16 Waterloo Road, Epsom, Surrey, KT19 8AZ.

Rhoda's very popular Ricardian novels are Fortune's Wheel and Some Touch of Pity.

Inevitably there have been some important developments in scholarship since this book was written. Most significantly, in 1983 it was widely believed that Richard III's son, Edward of Middleham, was buried at Sheriff Hutton. The complicated history of this 'legend' has recently been unravelled by Peter Hammond in a book on The Children of Richard III. The whereabouts of the prince's tomb is not in fact known.

If readers are aware of further information about Richard III's itinerary that has come to light since the publication of this itinerary, you are encouraged to contact the Society (research_officer@richardiii.net) and we will add any relevant notes to this page for other researchers.

Members of the research committee are currently in the process of updating and reformating Lesley Boatwright's itinerary of Richard as duke of Gloucester for publication.

John Ashdown-Hill's Itinerary of Edward IV is unfortunately no longer available on the Amberley Website.