The Annulment of Cecily Plantagenet’s Marriage to Ralph Scrope 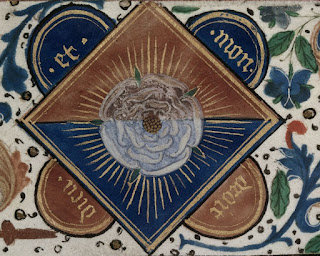 It has been thought for well over four decades now, thanks to a footnote in R. H. Helmholz’s Marriage Litigation in Medieval England,[1] that in 1486 Richard’s niece Cecily Plantagenet obtained an annulment from an otherwise-unrecorded marriage to Ralph Scrope, the second of the three younger brothers of Thomas, 6th Lord Scrope of Upsall and Masham. Helmholz’s footnote merely quotes a reference in one of the Act Books of the Consistory Court of York to a suit by ‘Preclara ac nobilis domina domina Cecilia Plantaginet contra Radulphum Scrope de Upsall’ (the most illustrious and noble lady, Lady Cecily Plantagenet, against Ralph Scrope of Upsall),[2] as an example of individuals of noble birth being clearly identified as such in the ecclesiastical court records; he  provides no discussion or explanation of the case in question other than dating it to 1486. This suit has, nonetheless, been assumed to have been an application for an annulment of marriage.

It is unfortunate that the very brief notes relating to the case in the Consistory Court Act Book are incompletely legible[3] and there are no surviving cause papers to flesh them out, but it does nonetheless seem reasonable to assume that this was, like the majority of cases brought by women to the church courts, an appeal for either the recognition or the annulment of a marriage; this also ties in fairly well with Polydore Vergil’s claim that King Richard had married ‘Cecily, Edward’s other daughter, to some unworthy no-account.’[4] Ralph was not exactly a no-account, but his eventual inheritance of the family lands and title could not at that time have been foreseen.

Since the court to which Cecily made her suit was that of the diocese of York, this may be assumed to be the diocese in which the wedding had occurred, in which case it can perhaps be tentatively dated to the few months between Queen Anne Neville’s death and the Battle of Bosworth, during which Cecily would have been resident at Sheriff Hutton.

Given Cecily’s status by the summer of 1486 – as the Queen’s senior sister and (once more) a legitimate princess – and that by the end of 1487 she was married to Henry VII’s uncle, John, Viscount Welles, annulment of the Scrope marriage does indeed seem by far the most likely subject of her suit, and for the purposes of the remainder of this article this is assumed to have been the case.

The process of pursuing a case in the Consistory Curt of York was, briefly, as follows. Both parties would normally appoint proctors, who would appear in their stead wherever possible. The plaintiff (actor) would initiate proceedings by entering a complaint and asking the judge to cite the defendant (pars rea). Where a proctor was being employed the complaint would be made in writing, in which case it was known as a libel.  The judge would respond to the libel by summoning the defendant to appear at an assigned day and place. Both parties were expected to appear in court on the assigned day, either in person or by proctor. ‘The first absence might be overlooked and only lead to another day being appointed, but three absences and the judge would oblige, the absentee was declared contumacious and was usually suspended: that is, prevented from attending church services.’[5]

There are two brief notes on Cecily Plantagenet’s case in the relevant Act Book. These are not dated but appear, from their context, to place the hearings in or around July of 1486. They record that the actor (i.e. Cecily) was, like several of the other plaintiffs, represented by a proctor named Latomer (probably Master Richard Latomer who in 1473 had been paid to write down the testimonies of persons offering at the statue of Henry VI in York Minster and whose servant William Waux is mentioned in a Minster visitation of  1495[6]). On the first occasion, the defendant (Ralph Scrope) failed to appear although the court waited a long time for him, and a second date was set at which three witnesses were to be produced.[7] A third hearing is then referred to, at which Ralph may again have failed to appear but the names of the three witnesses were given to the court. Four names actually follow, all so carelessly scribbled that the interpretation of them offered here cannot be regarded as definitive. The first name would appear to read (in translation) Sir Ralph Evers of Graystoke, and the second, W. Greystoke esquire. The third and fourth names are exceedingly similar to each other and probably represent a single individual since the witnesses were said to number only three; these two names appear to read Thomas Pol gentleman, and Thomas Poke gentleman.[8] This is the final piece of information on the case.

The grounds on which Cecily might have sought such an annulment are few. There were only a limited number of diriment, or nullifying, impediments to marriage and, of these, impediments of relationship or want of consent are the only ones likely to apply. The witnesses may provide some clue as to which of these impediments Cecily may have been claiming.

William Greystoke Esquire was probably the elderly Lord Greystoke’s brother of that name, as he, unlike Greystoke’s other brothers, is shown as still living at the time of the heraldic visitation of Yorkshire that, from internal evidence, appears to have been conducted shortly after Bosworth.[9] Greystoke was Ralph Scrope’s great-uncle, whilst Cecily Plantagenet was Greystoke’s first cousin once removed.  The Ralph Evers known to have been active in 1486 was a young man, one of the two sons of Sir William Evers (d. 1545) and a grandson of Sir Ralph Evers (d. 1461) by Elizabeth Greystoke. He was Ralph Scrope’s second cousin, Cecily’s second cousin once removed and the great-nephew of his fellow witness William Greystoke. Thomas Pol, gentleman, may be the ‘Thomas Pole, gentleman,’ to whom in March 1485 Lord Greystoke had enfeoffed his manor of Grimethorpe and other West Riding properties.[10]

The reason that Greystoke and Evers were both related to Ralph and to Cecily was that all four were direct descendants of Joan Beaufort. Ralph and Cecily’s relationship to each other, via Joan Beaufort’s two marriages, lay within the forbidden degrees of consanguinity, a fact that has already been noted by Douglas Richardson.[11]

The following tree shows the 3rd and 4th degree consanguinity between Cecily and Ralph, and also the position of the suggested Greystoke and Evers witnesses on the same family tree:

This is the only relationship that Cecily and Ralph shared within the forbidden degrees. It cannot be proved that the couple had not obtained a dispensation from its effects prior to marriage, but no such dispensation appears in any of the published papal registers;[12] neither was any copy of such a dispensation  entered into the register of Thomas Rotherham, Archbishop of York.[13]

It seems most likely that lack of a dispensation from the effects of this relationship was the grounds on which Cecily successfully sought an annulment from her marriage to Ralph Scrope; it was not a close relationship and was only in the half-blood, so had Cecily wished to remain married to Ralph she could probably have obtained a retrospective dispensation from Rome quite easily, provided she was in a position to make such an appeal. Ralph perhaps did wish to remain as Cecily’s husband given his failure to heed the court summons.

[3] This unfortunately seems to be normal for the period: ‘The records of the Church courts . . . had become messy and hurried scrawls. Many of the entries are quite illegible.’ (Helmholz, op. cit., p. 11)

[5] What Are the Cause Papers? research guide of the Borthwick Institute for Archives  https://www.york.ac.uk/borthwick/holdings/guides/research-guides/what-are-causepapers/#procedure

Posted by Research committee at 09:16