The myth of “Joan of York” or “Joan Plantagenet”

Any internet search for the family of Richard III will swiftly turn up sites that claim that his eldest sister was called Joan, born in 1438, but died young. At the time of writing this includes Richard duke of York’s Wikipedia page; geni.com (which locates Joan’s birth in York); and ‘the genealogy nut’ (claiming she was born and died in Yorkshire). Joan also appears in countless online family trees. Amy Licence recently argued that Richard’s mother, Cecily duchess of York, must have accompanied her husband to France in 1436 because Joan would have been conceived while Richard duke of York was there. Earlier this year, a Richard III Society branch newsletter speculated that Joan was born in Howden where Cecily’s mother (Joan Beaufort) is known to have lived.

Yet there is not a single record of Joan of York’s existence before the later twentieth century.

Richard III had four sisters - Anne, Elizabeth, Margaret and Ursula - as well as seven brothers. All of these (but not Joan) are named in two key fifteenth-century documents: the Clare Roll and the Bede Roll of the Fraternity of St Nicholas. Some of them also appear with their places and dates of birth in the Annales attributed to William Worcester, and in a fragment published by J A Giles in his compilation of sources: The Chronicles of the White Rose of York. The twelve names also appear in royal genealogies such as that in Harley Roll C 9 (produced 1472-3 and illustrated here) as well as the sixteenth-century genealogy that I mentioned in my last post. None of these documents mention Joan. Moreover, the Clare Roll specifically states (in both its Latin and English versions) that Richard III’s eldest sister, Anne duchess of Exeter, was born after a time of 'longe bareynesse'. Anne was born in 1439. All of this indicates that there was no such person as Joan of York, sister of Richard III.

Where did all these references to Joan come from then? It appears that she was created by a slip of the pen. After some searching I discovered a website that gave a source for Joan – Alison Weir’s Britain’s Royal Families: The Complete Genealogy. I had not read this book but had been impressed by the breadth of the author's research for her biographies of Eleanor of Aquitaine and Katherine Swynford, so I contacted her to ask if she could tell me her source for Joan. She explained that it was a genealogy written in the 1960s, but she had since concluded that no such child existed and Joan would not be appearing in her new edition of the Genealogy. Perhaps the compiler of that first genealogy had the family trees of Richard III’s mother, Cecily Neville, to hand as they were writing – most of these give Cecily’s eldest sister as Joan. It would have been an easy slip to transfer this name to another line. Among the multitude of tiny details each historian juggles, some such slips creep into every work. Unfortunately, it takes far longer to correct the historical record than it does to introduce one error, especially if that error has excited the interest of website writers. 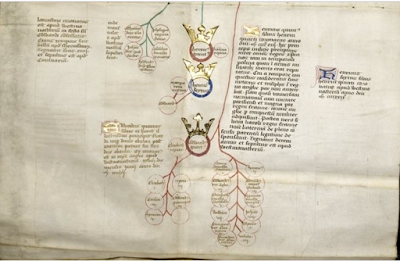 Image: detail from British Library Harley Roll C 9 membrane 19 (source: British Library, made available to the public domain). Genealogy showing Edward IV’s descent. The branch next to Edward IV (the final crowned circle) shows the king’s place as the third child in a list of all twelve of his parents' children, beginning with Anne duchess of Exeter on the left.

(For further details of manuscripts and books mentioned in this piece see J L Laynesmith, Cecily duchess of York, published July 2017)
Posted by Research committee at 02:03