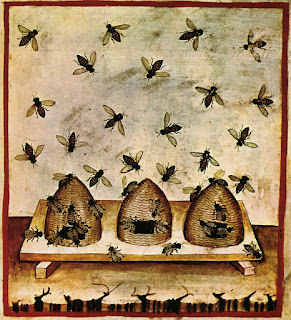 Alexandra Sapoznik has recently published an article in the Economic History Review entitled ‘Bees in the medieval economy: Religious observance and the production, trade, and consumption of wax in England, c.1300–1555’. [EcHR November 2019]   As Sapoznik notes, in addition to lighting candles to mark each stage of the church’s year, and in particular during the celebrations of Christmas, the Purification of the Blessed Virgin Mary (2 February) and Easter, candles were used to mark every stage of life. ‘Candles were placed in infants’ hands when they were baptised, held by women when they were churched and when they married, carried before the Host when it was taken to visit the sick, placed around the body after death, taken with the body as it was carried to the grave.’  This made me think about one particular aspect of the Milles wills: many testators made bequests of lights (candles) in their parish church, or for torches or wax to ‘burn about their corpse’ at their funeral and subsequent commemorative services.  The candles would not burn down completely during these services and so what was left was often bequeathed for other purposes.

The more expensive candles, tapers or torches were made of beeswax but torches in particular were often made of a cheaper mixture of tallow, wax and resin; however, some  testators specified wax to be used. For example, Isabel Stephens of the parish of St Michael Queenhithe (London) asked her executors purchase four new torches of wax to burn around her coffin during her funeral services; afterwards one torch was to placed on the high altar of St Michael’s church to burn at the elevation of the blessed Sacrament (that is, at the high point of the mass), two more on the altars of Jesus and of Our Lady in the same church, and the fourth was to go to the parish church of St Dunstan, Cheam (Surrey) where she was born.

Sometimes the testator asked that the funeral torches or tapers were held by poor men, who were usually given some clothing, money or food in return.  John Mountfort, a priest in the Hereford area, was very specific: six tapers, each of 5 lbs of wax, and six torches, priced 6s each, were to be held by poor men. The six poor men holding the torches were to each have a black gown and hood and each of the poor men were to have 4d.

Sometimes burning candles were requested for a number of years, so they would need renewing. Seeing the candles burning would remind parishioners to pray for the soul of the person who had originally provided them. Usually executors were expected to pay for the candles out of the estate of the deceased; occasionally the source of funding was clearly stated.  Robert Hervy of Colchester bequeathed a light made of a pound of wax to burn before the image of Jesus in St Peter’s church, Colchester, for 7 years during divine service; furthermore four times a year the candle was to be made back up to one pound in weight.  The money for the wax was to be taken out of the rent paid for the house in North Street, inside the North Gate of Colchester, in which Thomas Slatoure was living, which Hervy had bought from John Clerke, the weaver.

Interestingly there was also an element of recycling. New wax was often added to ‘old’ wax reused from candle ends held over from the churches’ own stock, or purchased from wax chandlers who were paid by the pound to make candles. One Milles will sheds light on this. John Meryk of Southwark had requested twelve torches to be used during his funeral and commemorations; afterwards six were to be used in the parish church of St Thomas; the other six were to be taken back to to the wax-chandler they were bought from, and he would pay for the waste a sum agreed between himself and Meryk’s executors.