On 21 March this year an important and interesting manuscript was sold in Exeter for £20,000, well over the original estimate of £4000 - £6000. This is a Compotus or Receiver's Rolls for Cornwall and Devon drawn up under the aegis of Richard III, comprising the account of one year's receipts from the manors, burghs and stannaries (tin mining districts) of the Duchy of Cornwall; together with receipts for Devon. It covers from Michaelmas, 22nd year of Edward IV to Michaelmas 1st year Richard III (29 September 1482 to 29 September 1483). It thus covers the end of the reign of Edward IV, the brief reign of Edward V and the first few months of that of Richard III. The Dukedom of Cornwall had been created by Edward III for the maintenance of his eldest son, and can only be held by the oldest living son of the monarch. The period of this account therefore covers the rule as Duke of Edward IV’s eldest son Edward and Richard III’ only son Edward of Middleham who became Duke as soon as his father became King.

By the end of fifteenth century, profits from the Duchy amounted to some £500 per annum and its administration was sophisticated and efficient, the annual receiver's rolls, of which this is a fine example, being the summation of a host of preliminary local records and accounts. The present rolls record the final accounts of annual receipts from many of the Duchy manors in Cornwall as well as some in Devon. The profits from the Duchy came to about £500 per year.


The roll is divided into sub-accounts, totals for rents, sales and court receipts are given and the bailiff's name provided. In most cases the receipts are noted as delivered into the hands of Sir Robert Willoughby and Sir Thomas Arundell. Though abbreviated in this final account, the entries for each manor usually contain several personal names (the bailiff or reeve, in particular) and other local placenames, which makes it useful for local historians. The final receipt for the manorial income is usually between about £12 to £30.. Both the hundred court and stannary receipts are given in the same way. The receipts from the stannary courts of the tin mines were especially valuable components of Duchy income. 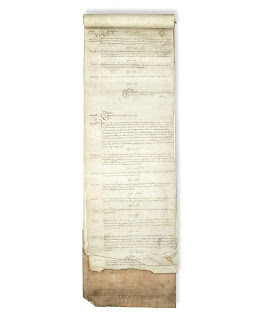 
Posted by Research committee at 13:58