An article in The Times on Monday 29 January 2018 gave details of a medieval scroll known as the Canterbury Roll. While this is not a new discovery, what is new is that it has been digitised and is available for everyone to see at the Canterbury University, NZ website. Originally called ‘The Maude Roll’ after its nineteenth century owners, it was purchased by Canterbury College - now Canterbury University - Christchurch, New Zealand early in 1918. Arnold Wall, a professor at the college published a transcription of the roll in 1919 and this too has been made available on the website and can be downloaded as a pdf.
When the Maude family moved to New Zealand in the nineteenth century they took the roll with them, the story was that it had always been in the family, and Wall attempted to trace the family back to the fifteenth century, when the roll was first written. Subsequent research suggests that ownership by the Maude family may not go back any further than the nineteenth century. Who commissioned the roll in the fifteenth century therefore remains something of a mystery.
With its digitisation it is possible to explore the roll in detail. It is a genealogy of the kings of England, created early in the fifteenth century. Beginning with the founding myth of English kings, from the Trojan refugee Brutus travelling to Albion and renaming the island Britannia, through the mythical kings of Britain including Arthur, to the Saxon kings, in continuous succession to Henry VI when the roll was created. Since 1429-33, when it was first written, the roll has undergone a number of amendments.
It is thought that it was originally drawn up to demonstrate the Lancastrians’ legitimate claim to the throne. Richard II’s deposition is passed over, as is the claim of the Mortimers. Legitimate descent is shown in a straight line from Edward III. It does not reflect Henry IV’s early dalliance with the idea that Edmund Crouchback was the eldest son of Henry III; that was a notion too far, it was much easier to simply overlook a claim through a woman.
With the accession of Edward IV the roll then undergoes an amendment. The new scribe has made notes to ensure there is no mistake about who is the true king. He adds a note to show that Richard II was deposed and Henry IV usurped the throne. Red lines are then added to show the true line of descent from Edward III that is, via Lionel of Clarence and his daughter Philippa. Added to the descent through Edmund Duke of York, the legitimacy of the house of York is undisputed. ‘Edward, son and heir of the above named Richard, recently duke of York, true heir of the kingdoms of England and France, ... on the fourth day of March, through the greater and more sensible [part] of the people, was elected as king of England by the grace of God and the voice of those [people], rising and receiving the kingdom of England in London for himself, by law so much as by inheritance, in the year of the Lord 1460.’
As well as Edward IV, the new scribe includes his brothers, Edmund, George and Richard and his sisters Anne, Elizabeth and Margaret. Margaret is named as duchess of Burgundy so this amendment must have been made after her marriage in 1468. Sadly no further amendments were made to the roll.
The roll is seen as a piece of propaganda, originally for Henry VI and then Edward IV. Who commissioned the roll is a mystery. Did it remain in the same hands throughout the fifteenth century?  Was the owner someone who changed sides and wished to demonstrate his new allegiance to the house York, or was it someone who was simply reflecting the ‘reality’ of the day.
It is a pity that it ends with Edward IV, it would have been interesting to see how the owner reflected the changes of 1483 and 1485. Was it too dangerous or too uncertain? Or had the owner died or lost interest?
What the role does show is that genealogy was important, and that something seemingly so straight forward could be disputed. Genealogy as propaganda was not limited to this roll, a number exist. A splendid example should already be known to members, it can be partially viewed here  (a digital copy is available on CDRom, entitled Leaves of Gold, through the society shop). Held by the Free Library of Philadelphia, this is a beautifully illustrated roll. Edward IV appears at the top in full military glory, there is no mistaking that ‘this sun of York’ was responsible for its production. The Canterbury Roll looks more like a working copy beside it, having little in the way of illustration. It is easy to imagine Edward’s roll on display, but it is hard to imagine that many people actually saw the Canterbury Roll. The value of either as propaganda is therefore hard to see. Those seeing Edward’s roll may have been visitors to his court, in many ways it was therefore preaching to the converted or the already loyal.
The Canterbury Roll perhaps lay amongst other records and chronicles, but someone thought it worth updating, just as Chronicles were continually added to and updated. For the modern reader it adds another mystery to the fifteenth century; who owned the roll and what was it they did or did not want to say about the occupier of the throne and any potential claimants?

Medieval genealogies could take many forms - this tree from British Library MS Harley 7353 takes a much more image-based approach than the Canterbury Roll. It shows Henry IV literally cutting through the branch on which Richard II sat and has Henry VI and Edward IV facing each other at the top, swords at the ready. 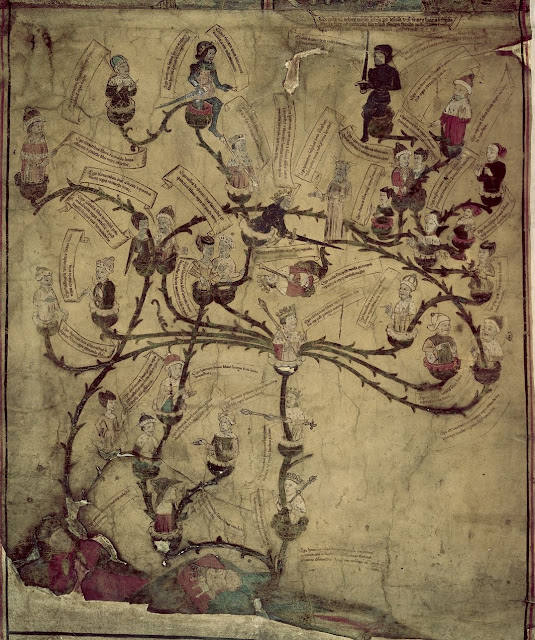 Posted by Research committee at 07:27


A couple of weeks ago I attended a fascinating seminar at the IHR presented by Ed Meek on the topic of his recent book: The Calais Letterbook of William Lord Hastings (1477) and Late Medieval Crisis Diplomacy 1477-83. Some of the research as well as the publication of this exciting contribution to our understanding of Richard III’s age was funded by the Richard III and Yorkist History Trust (which was founded by the Richard III Society in 1984).

The letterbook of the title is a severely damaged manuscript that is now housed in the Huntingdon Library, California. It is a record of William Lord Hastings’s French correspondence between April and September 1477, a crucial period in England’s relations with the continent in the aftermath of Charles the Bold’s death. Meek has provided both a transcription and translation as well as a detailed introduction interpreting the significance of the letters.

He explained that the manuscript has occasionally been used by other historians. However, he argued that its importance for our understanding of English policy has not been fully realised. For one thing, we should not accept Cora Scofield’s influential interpretation that Edward IV and Hastings were at odds at this time. On the contrary what comes through most strongly about Lord Hastings from these letters is his very deep loyalty to Edward IV. I came away fully persuaded that the manuscript provides both a vivid glimpse into a crucial moment in English politics and intriguing insight into the perennially controversial Lord Hastings. The book has been published by the Richard III and Yorkist History Trust and is available from Amazon or on ebay at £35. There will be a special discount for members of the Richard III Society: see the March 2018 edition of The Ricardian Bulletin for further details.