The Ultimate Nuncupative Will 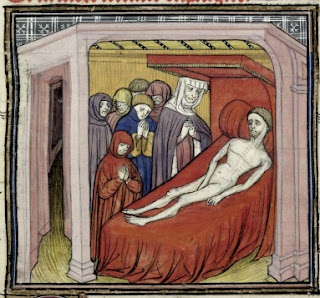 
A group of Society members are currently transcribing (and translating where necessary) the wills in the ‘Milles’ Probate Register from the Prerogative Court of Canterbury (PCC).  The ‘Milles’ wills were granted probate during the years 1487 to 1491. The register includes a handful of nuncupative wills, that is, wills that were dictated by the testator on their deathbed in front of witnesses and written down afterwards.  One of them is what you might call the ultimate nuncupative will: the testator was barely able to speak and simply muttered ‘Ye’ (‘yes’/’yea’) to a series of questions.
In early July 1488 the unfortunate Nicholas Goldwyn suddenly fell ill and lost the power of clear speech.  His wife Margery called in their parish priest, Sir John Haynes,[1] the parson of Woolwich, so that Nicholas could be enabled to make his will in case he should die soon. Presumably Margery did this with her husband’s prior consent. On 8 July his will was drawn up, following a meeting during which Sir John asked Nicholas five questions with which a basic will and testament could be framed, and to each question Nicholas answered ‘Ye’.  The resultant will is a record of this interrogation; if any questions were asked that got ‘no’ for an answer, they were not recorded. The essence of the will is its brevity.[2]
The Goldwyns had three children, William, Johanne and Katheryn, with another child on the way, so Margery’s anxiety to have Nicholas put his affairs in order is understandable. Question 1 concerned the settlement of the goods and lands of Nicholas.  Would Nicholas have his lands shared evenly between his son William and the baby, if it were a boy, after the death of Margery? Question 2 concerned the daughters.  Were they each to have £40? Question 3 concerned the unborn baby.  If this baby were a girl, should she have £40 too? Question 4 concerned Nicholas’s brother-in-law, John Cowper, who owed Nicholas money.  Would Nicholas remit half of this debt, for charity’s sake? Question 5 identified executors.  Was Margery to be his executrix?  Nicholas agreed to all five questions.  There was a sixth question, raised by Margery.  She wanted Nicholas to agree that Sir John should be her co-executor, and Nicholas duly concurred.
Unlike many wills, there is no elaboration regarding the form of the funeral service or where Nicholas should be buried; no indication of where his lands lay or what goods he owned; nor when the daughters were to receive their money.  There were four witnesses present: John Cowper (the brother-in-law), James Clerk, Agnes Giles and someone called Ason (perhaps Alison) Fox.
When the will was proved in the PCC, Sir John expressly refused to act as co-executor.  Perhaps he felt that if he did so he would run the risk of being charged with abusing his office, given the incapacity of his parishioner at the time, even though there were witnesses.  One can only guess what Margery thought of his refusal after she had particularly asked her husband to make Sir John her co-executor.  Nevertheless, on 28 July 1488 she was granted the administration of the will.  One hopes she bore the baby successfully and that her friends and relations supported her during that bleak time.
What killed Nicholas?  Lockjaw, alias tetanus, is a strong candidate for his killer.  If the bacteria that cause tetanus (Clostridium tetani) enter the body through a wound, they can quickly multiply and release a toxin that affects the nerves, causing symptoms such as muscle stiffness and spasms, including lockjaw. [3]  Nowadays people are immunized against tetanus with a series of injections during childhood; in 1488 Nicholas Goldywn would have had little chance of survival.
Heather Falvey and Jan Mulrenan