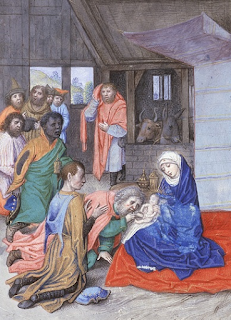 Shortly before Christmas, The Telegraph published an article on Richard III’s Christmas gifts. It mentioned that Richard ordered his Exchequer to pay £100 in ready money to the grooms and pages of his chamber at Christmas 1483. This is almost £70,000 in today’s money. Moreover, in the new year Richard settled a bill with a London goldsmith for Christmas gifts and other jewels worth the equivalent of £500,000 today. The article speculated that Richard’s lavish generosity was an attempt to secure the loyalty of the court after the recent rebellion against his rule. Nonetheless, the headline was an unusually positive one for Richard: “Not so much winter discontent in court of generous Richard III”.

Research currently being undertaken for the Society, thanks to a bequest from Pauline Stevenson, sheds significantly more light on this. The source for this expenditure is a collection of documents at The National Archives. Indeed, the Telegraph’s article was prompted by a Tweet about them from TNA. The documents in question are known as Warrants for Issues. Scholars have been using them for decades but hitherto they have not been published, other than a few details in the List and Index of Warrants for Issues. The Society has begun creating detailed calendars of these documents, starting with the period 1480-85. The plan is eventually to include all of Edward IV’s reign as well. From the work done so far, it is clear that there was nothing exceptional in Richard’s payment to his grooms and pages. His goldsmith’s bill, however, may have been unusually high.

According to the Black Book of Edward IV’s Household, there should be ten grooms and four pages of the king’s chamber. Like other grooms and pages of the household, they were provided with lodging, food and clothing as part of their job. They were also given a quarterly allowance. Pages received 20d and grooms either 40d or 6s 8d, depending on how much clothing they received. The Black Book notes that, besides this quarterly income that was provided by the counting house, they should also receive “the great reward given yearly from the King’s privy coffers to the grooms and pages of his chamber”.[1] This Christmas bonus, it seems, was essentially part of their regular income but it clearly made the grooms and pages of the king’s chamber far better paid than those elsewhere in the household. It is likely that the grooms’ individual share of the £100 was greater than the pages’, probably £8 6s 8d for the grooms and half that for the pages.  According to the National Archives’ Currency Converter, the modern equivalent of the grooms’ bonus would be £5,760. It was twelve times as much as they received from the counting house in the course of the rest of the year. It was certainly a generous gift but its only political significance in 1483 is that it demonstrates Richard III following his brother’s policies.

The payment to a London goldsmith might be more interesting. On 22 January 1484 instructions were sent to pay Edmund Shawe, goldsmith, “the sum of £764 17s 6d as well for certain plate by him ordained for the king’s year’s gifts against Christmas last past, and for other jewels by him ordained and delivered to the king’s own hands” (E 404/78/2/28). Edmund Shawe was of course mayor of London the previous summer, during Richard’s accesson, and it was his brother, Ralph, who had preached the famous sermon declaring that Edward IV’s sons were bastards.

Edmund Shawe had been engraver of the royal mint from 1462-82 and loaned Edward IV money on occasion. According to BL MS Harley 433 (digitised by the Society here), Shawe also lent Richard III 400 marks early in his reign, and Richard had spent £134 on New Year gifts purchased from Shawe in December 1482. John Stow recorded that in December 1483 Richard sold some of his own silver and gilt plate to Shawe for just over £550. This was perhaps to acquire some of the funds necessary for a lavish Christmas.

Unfortunately it is impossible to know how much of the £764 spent by Richard in 1483/4 was for Christmas gifts and what was for jewels for the king himself (and perhaps his queen). This makes it difficult to judge how unusual it was. It may just possibly be significant that Richard arranged for the Receiver of Fee Farms to pay £431 10s 10d out of the total owed to Shawe (according to BL Harley 433). It could be that this was the amount actually spent on Christmas gifts, in which case it would again appear to reflect standard practice. Two years previously, in February 1482, Edward IV had paid £464 17s 3d to John Shawe (nephew to Edmund and Ralph) for ‘year’s gifts’ that included a gold cup costing more than £45, a gold cross set with diamonds, and four diamond rings (E 404/77/2/54).

In conclusion, it could be that Richard III’s gift giving at Christmas 1483 was more generous than his brother’s had been, but at present we simply cannot say. Both kings were lavish in their gift giving as befitted the medieval concept of a good prince.

[1] The Black Book was probably in part an ideal rather than a wholly accurate reflection of practice, so it is impossible at present to be sure whether the £100 was originally a gift that came from the privy purse which Edward IV later started taking directly from the Exchequer. It may be that the compiler of the Black Book simply thought it ought to come from the privy purse.

Posted by Research committee at 04:25