The wills of William Brandon, a Yorkist whose sons supported Henry Tudor

Chris Reay Connor shared details of one of the testators of the Society's Milles Wills Project at last year's study day: Sir William Brandon, grandfather of one Henry VIII's most famous courtiers. 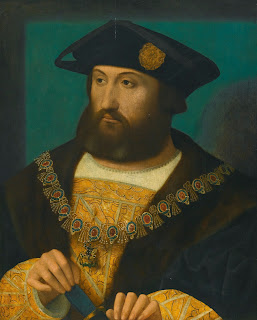 There are two wills of Sir William Brandon of Wangford (Suffolk) recorded in the registers of the Prerogative Court of Canterbury. The first was written on 9 June 1475 and originally recorded in the register ‘Milles’ as being granted probate on 13 July 1491 but this grant was subsequently invalidated (TNA, PROB 11/8/629); the second, recorded in register ‘Dogget’, was written on 4 March and 9 April 1491 and was granted probate on 17 November 1491 (TNA,  PROB 11/9/49).

William Brandon, born before 1430, had been  in the service of the Yorkist kings through his association with the dukes of Norfolk, rising to be a senior member of the council of John Mowbray, fourth duke of Norfolk.  Brandon was knighted at Tewkesbury by a grateful Edward IV and swore allegiance to young Prince Edward, the future Edward V, in 1471.  In 1475 he was contracted to travel to France with the royal forces, hence he wrote a will in June of that year.   This document is not a rushed affair. It is a long and considered listing of his lands and of his children and their bequests.  His sons are named as William, Robert and Thomas, and his daughters are Mary, Anne, Margaret the elder, Margaret the younger and Kateryne.  His wife, Elizabeth  née  Wingfield, is given  overall control and the bequests are fairly standard.   The English army returned safely and William returned to royal service.  The will was not needed at that time.  The second will, partly written in April 1491, is shorter, not least because his daughters are now married (or dead) and are not dependent (and indeed are not mentioned at all).  Only his son Robert receives anything; he is the principal legatee, with reversion to William’s wife, Elizabeth.  In fact three-quarters of the will is nuncupative (i.e. dictated), with an earlier date of 4 March 1491.  This portion has a detailed list of lands, all bequeathed to his wife.

Their eldest son William Brandon, had been Henry Tudor’s standard bearer, and had died at Bosworth.  If he left a will, it has not been found yet.  He is recorded as being buried in the grave pits at Dadlington.  In July 1483 William senior had been present at the coronation of Richard III, but, despite marks of royal favour, his loyalty became suspect when two of his sons, William and Thomas, joined the rebellion of Henry Stafford, duke of Buckingham, in October that year. When the rising failed, William junior and Thomas fled to Brittany, where Henry Tudor was.   Some of William senior’s lands were seized on the king’s orders, but he secured a free pardon in March 1484.  By the end of that year he was out of favour again and sought sanctuary in the city of Gloucester, where he remained until Tudor became king.  He regained his lands and petitioned for the return of the office of Knight Marshall of the Marshalsea court, which he passed to his son Thomas, who was also at Bosworth with his brother but had survived. Thomas became a trusted and noted diplomat under the Tudors, dying in 1510.  He married but had no surviving children.  His brother Robert appears to have remained in Norfolk, married twice, but had no surviving children; he requested to be buried with his first wife, whilst his second wife was his executrix.

William, the standard bearer, had married Elizabeth Bruyn, widow of Thomas Tyrrell of Heron (grandfather of James Tyrell).  William and Elizabeth had four sons and one daughter: William, Thomas, Robert and Charles, later duke of Suffolk, and Anne, who married twice.  Elizabeth Bruyn married for a third time, to William Mallory.  The children of the standard bearer were brought up within the Tudor household, and Charles became the most famous, passing down the Brandon blood through a Tudor alliance to Lady Jane Grey.

Posted by Research committee at 04:56