On 27 September,  a number of Society members were present for a fascinating day exploring the tapestry at St Mary’s Guildhall in Coventry, organised by Tudor Coventry CIC and Medieval Coventry. This tapestry depicts a king and queen kneeling either side of the Assumption of the Virgin Mary. There are an assortment of men behind the king, and women behind the queen and a row of saints above them. It was made in the early sixteenth century and was long thought to depict a Tudor court. However, Christian Liddy has argued that it depicts the mid fifteenth century when Coventry became the home of Henry VI’s court in the wake of Richard duke of York’s second protectorate.[1]

There has also been more recent speculation that one of the figures represents Richard III.[2] The character in question holds an item that has clearly been rewoven in an attempt to alter the image which looks to have been a snake originally. This has been interpreted as ‘an emblem of evil and deviousness’, according to an article on the guildhall website. The figure also holds a small item which has been identified as a coin and thus a symbol of Judas. 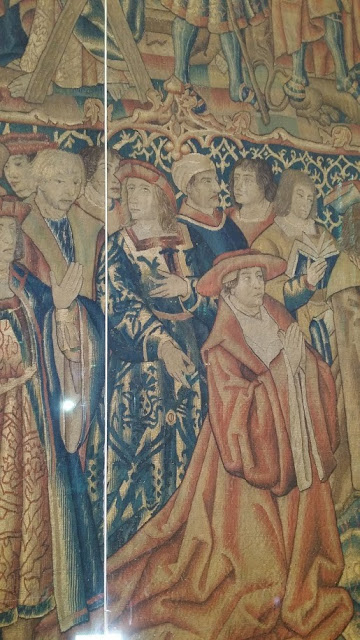 When the Society Conference was held in Coventry two years ago, member Fred Hepburn persuasively argued that the striking figure was much more likely to represent Richard duke of York than his son. Fred explained that the idea specifically of a ‘serpent of discord’ was popular in both mid-fifteenth and sixteenth-century literature and Richard duke of York would chronologically make more sense as an adult at the court of Henry VI and Margaret of Anjou. Polydore Vergil, most likely writing as the tapestry was being designed, was clear that ‘this general disturbance [the Wars of the Roses] took its origin from Duke Richard of York’. The smaller object in the figure’s hand, Fred suggested, was actually a gambling die, emblematic of York’s risk taking. Under Henry VIII, who was rather more proud of his Yorkist lineage, it might have seemed politic to remove the serpent.

Fred was among the speakers again at Coventry this autumn, along with Jonathan Foyle discussing the iconography of the window above the tapestry (which definitely does depict Henry VI but in an unusually military fashion), Kate Giles explaining the context of guildhalls more widely, Maria Hayward investigating the making of the tapestry, Mika Takami reporting on it from a conservationist point of view and myself talking about Margaret of Anjou and Henry VI’s time in Coventry. The talks began with Mark Webb from Historic Coventry Trust giving the local historic context and David Starkey introducing the political context of the period in which the tapestry was made. It was an excellent opportunity for sharing ideas and has set up considerable further discussion.

It has long been recognised that the top central figure in the tapestry – justice enthroned - was a late addition, presumably replacing an earlier image of the Trinity, but few of us had noticed until Maria’s talk that a rosary seems to have been embroidered out on one of the women’s dresses. Yet the saints and the Virgin Mary were allowed to survive, unlike in so many churches. It really is a wonderful relic from the last years when such art could be made before the Reformation. Maria also pointed to banderoles in each corner of the tapestry (which I’ve never been able to make out in the poor light there) which appear to have the initials H and M on them, presumably for Henry VI and Margaret of Anjou. 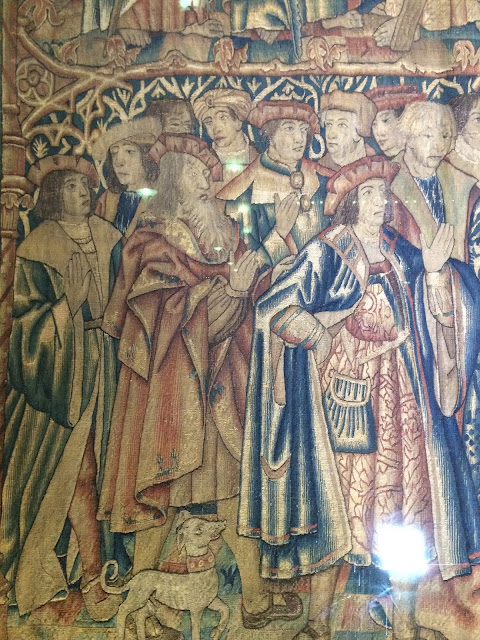 Much debate centred on the dogs at the feet of some of the courtiers and the question of whether they might be talbots, which was the emblem of the earls of Shrewsbury, or, as a questioner from the floor proposed, Tudor/Richmond greyhounds, or merely domestic dogs. The male figure beside the dog has an ample purse which might have made him a candidate for identification as John Talbot, earl of Shrewsbury and Treasurer of England, if we could find a logical reason for him being so very prominent in the tapestry (Fred Hepburn suggested). If instead it is a Tudor emblem then it might depict Henry VII’s father, Edmund Tudor (as Jonathan Foyle was the first to point out). If so, might we start identifying the elderly man touching ‘Edmund’s’ shoulder as Owen Tudor? Then we might consider some of the possible parallel women as ancestresses of Henry VII and Elizabeth of York too: the very small figure near a white dog as Margaret Beaufort, more prominent women as the queen’s grandmothers. Or is it over ambitious to imagine sixteenth-century guildsmen wanting to weave so much specific history into their design? The debate will continue! 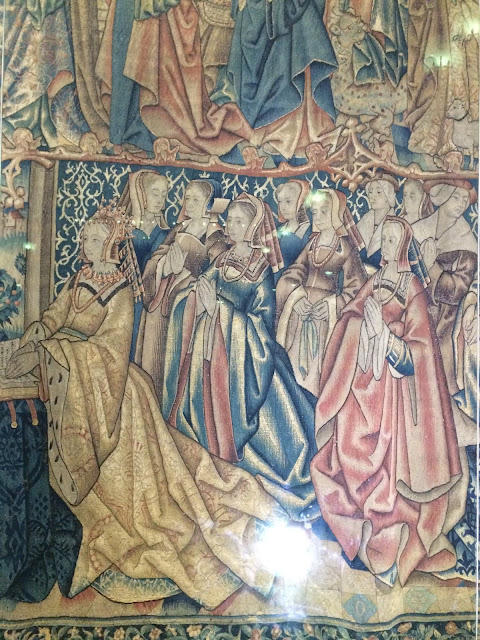 It is fair to say that not everyone was persuaded that the figure with the ‘serpent’ was Richard duke of York. One query was whether it was really a serpent at all or perhaps another rosary? Another was why put such a discordant figure in the tapestry in the beginning? Moreover, serpents could also be symbols of wisdom, something that might have seemed less obvious at a later date and so prompted the over-embroidery (an image of Elizabeth I currently hanging in Kenilworth castle clearly once held a serpent which has been painted over with a posy of flowers). What was clear in the final discussion is that none of the speakers thought it plausible that Richard III was depicted on the tapestry.

Posted by Research committee at 09:06