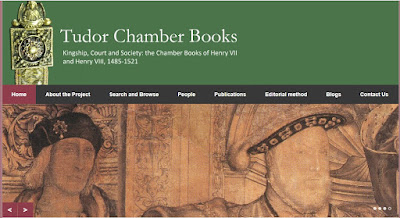 A fantastic new resource for research into the late fifteenth and early sixteenth centuries has just been launched: Tudor Chamber Books. It is an opportunity to browse or search the detailed records of weekly expenditure and income for the royal chamber in surviving receipt and expenditure books for 1485-1521. It also includes the privy purse expenses of Elizabeth of York, re-transcribed with additional material not included in the previously published version. The website is not yet finished – the project organisers describe the current site as a ‘draft’ – it will eventually be more searchable, and the formatting needs work, especially for the modern English version. Nonetheless, what we can now access from the comfort of our homes are over 4,000 pages from The National Archives and the British Library that will provide an invaluable resource for historical research, especially into statecraft, court life and material culture.

Two members of the research committee attended the launch of the database at a fascinating conference at the University of Winchester, where the project has been based. Papers were delivered both by members of the research project and external scholars. Many of these will eventually be published in a special edition of the journal History. Delegates learned that although no accounts survive for the Yorkist kings, it was Edward IV who was the first to use it extensively. Henry VII initially reverted to the Lancastrian reliance on the exchequer but found that system inefficiently slow. The chamber books reveal the intricacies of the accounting system, the king’s regular oversight and his sometimes clumsy penmanship. The breadth of topics that will benefit from this resource was indicated in papers that ranged from the queen’s household and her ladies or the crown’s relationship with Londoners or major nobles, to the Field of the Cloth of Gold, iconography in royal palaces, literary culture at court and the royal librarian, Quentyn Poulet.

In the course of the final roundtable, we were encouraged not just to search for the people or objects that intrigue us, but to spend time browsing through the pages, getting a sense of the rhythms of court life and coming by chance upon intriguing details that searches would never have brought us to. It is slightly addictive, drifting through the payments, wondering who those monks were spying on or what sort of 'dragon' Lord Grey of Wilton gave the king on the anniversary of Bosworth 1507. I feel it will be a wonderful resource not only for academics, students and enthusiastic amateur historians but novelists too.

Posted by Research committee at 05:03