A rare Richard III half angel coin found and auctioned

A rare half angel coin dating from Richard III’s reign was located recently by a metal detectorist in a farmer’s field a few miles from the battlefield of Bosworth. This has given rise to speculation that it may have been lost by a soldier who fought at the battle.

Only a few examples of half angels survive from the king’s reign.  They were a gold coin first minted by Edward IV, and were worth 6s 8d, that is half a mark. In size they were about 2cms or just over ¾ inch.

The half angel was not a coin likely to be seen or used by most of the population.  The average skilled labourer might get 4d to 6d per day in this period, about 2 shillings per week or a maximum of £5 per year if he worked every possible day. The cost of his staple food and drink, that is bread and ale, would take most of this if he had to feed a family from his wages. Ale could be bought for about 1d per gallon, (or two pints for a farthing) and a loaf of medium quality for a 1d. The size of the loaf varied according to the price of grain. It has been calculated that these figures would allow a family to buy enough food to sustain themselves but even so at these prices a labourer could only feed his family without (usually) having money left over.

This coin thus represents a significant amount of money. Whoever dropped it and however they had come by it they would have been seriously upset to have lost it.

The coin was auctioned in London on the 13th December 2017 by Dix Noonan Webb, the international coins, medals and jewellery specialists, and was expected to fetch up to £15,000.  In the event it was sold for £40,800 to a private collector based in the United States. 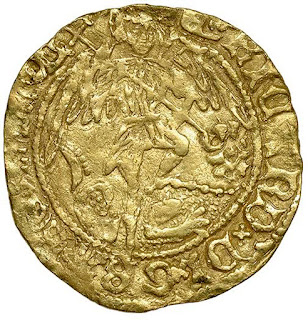 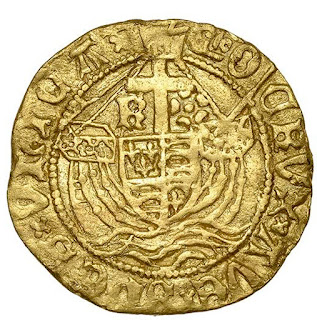 Images courtesy of and copyright to Dix Noonan Webb

1. The face of the coin has an image of the Archangel Saint Michael slaying a dragon, the legend inscribed with ‘RICARD:DI:GRΛ:REX ANGL.’  (Richard, by the Grace of God, King of England)

2.The reverse shows an image of an English galley with the monogram 'R’ and a rose set below the main topmast, the ship surmounted by a shield bearing  the king’s arms, the legend inscribed  ‘O CRUX AVE SPES UNICA'    (Hail the cross our only hope)

Both sides have the boar mint mark just past the 12 o'clock point.

John Saunders and Peter Hammond
Posted by Research committee at 15:30