Occasionally new discoveries in historical research are not unlike coming upon a buried treasure hoard (and sometimes of course that is exactly what they are). One of my personal favourites is the long-neglected manuscript in Sir Walter Scott’s library that turned out to be a translation by Osbern Bokenham of Jacobus de Voraigne’s Golden Legend. Bokenham scholars had always known such a translation had been made, but they thought that every manuscript had been lost. Yet more remarkably, the medievalist Simon Horobin has made a very persuasive case that this was the very manuscript that Richard III’s mother, Cecily duchess of York, owned and eventually bequeathed to one of her granddaughters. This beautiful manuscript is now available for anyone to view online at the Faculty of Advocates’ website.

More often discoveries are much less spectacular, albeit still valuable pieces of the jigsaw of our understanding of the past. Many of these jigsaw pieces of knowledge emerge from parchment pages in the archives. Others have been sat, ignored, on academic library shelves for generations without making their way into more accessible history books. This was the case with the inspiration for a brief article I have written for the forthcoming Ricardian Bulletin. I had ordered up volume 144 of the publications of the Surtees Society, which our university library keeps hidden in a great store. I knew it was a transcription of a couple of sixteenth-century heraldic manuscripts that had been copied from earlier pedigrees and I was hoping to learn more about the Neville family whose genealogy it included. When I flipped open the pages to the royal family, I was pleasantly surprised to see that it included every one of Richard III’s brothers and sisters.

The most widely circulated lists of Richard III’s siblings (associated with William Worcester) are incomplete. Hitherto I had only found mention of Richard III’s brother Thomas in the Clare Roll and the Bede Roll of the London Parish Clerks’ fraternity. What excited me about finding all of the children’s names here was that, for those who had died before 1483, in most cases their place of burial (and sometimes their place of death) had been included in the genealogy. It has to be confessed that this is not a wholly accurate genealogy. However, the mistakes in it can easily be explained by careless copying (an Edward has become Thomas like his son; Tewkesbury has been rendered Fotheringhay, perhaps because of so many other mentions of Fotheringhay). It seems unlikely that someone had simply invented the references to these children’s burials, especially since places of burial are not given for all of them. No one will be surprised to learn that Henry, Thomas, William and Ursula were all buried at Fotheringhay. Their father, Richard duke of York, clearly intended this church to be the family mausoleum. Yet I am not sure that any recent historian has previously pondered where these children’s bones might lie.

They may have been no more than days old when they died, or perhaps a few years. As individuals they made no impact on our island’s history as their longer-lived siblings did. Nonetheless, the knowledge of their funerals and burials at Fotheringhay is another fragment of the fifteenth-century to illuminate our understanding of Richard III’s world. 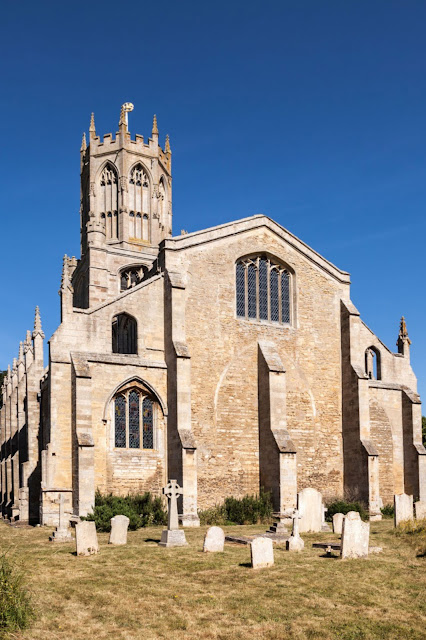 Fotheringhay church, east end. The bones of Richard's siblings most likely lie here where the choir once stood. The remains of their parents, Richard duke of York and Cecily Neville, were moved from here in Elizabeth I's reign.